The adventure began on Saturday February 6th, 2016 as Empress XII Lonnie picked up Emperor Wendy Pinkhouse of New York and Stefan Hemming, ICP to the Emerald Kingdom, to start on their road trip.

Winding through the vineyards of Temecula, they stopped for a magnificent breakfast at Marie Calendar’s and continued their travels arriving in San Diego at the Marriott Mission Valley in time to meet and greet with many friends from all over the country, including Hawaii, New York, Washington DC, and of course courts from Canada and Mexico.

Lonnie took Stefan to hospitality for cocktails and food, then toured the three rooms with jewels and crowns being sold by vendors and Imperial Jeweler’s. Then it was time to prepare for the Coronation Ball as Emperor Mikie Too and Empress Toni Saunders prepared to stop down in all of the splendor of a San Diego Coronation. Lonnie represented Los Angeles and Emerald Kingdom and was escorted by ICP Stefan Hemming down the runway in an elegant entrance representing royalty of England or Sweden as Stephan would say. 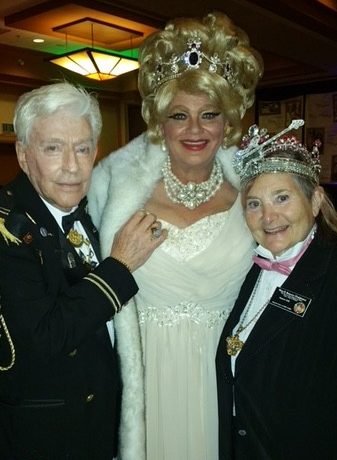 Czarina Liz Loren was in constant communication with her representatives making sure accommodations were adequate and proper tickets were in place, and sending messages of love and her greetings to her many friends on the circuit.

After the ball, Wendy, Stefan and Lonnie hit the local In & Out Burger for a midnight meal, then off to bed. Sunday morning it was time for the Brunch and meet and greet of the new monarchs Emperor James von Rothschild and Empress Jaeda Reign. The three friends then loaded back into the chariot and headed north, stopping in Temecula to inspect some antique store and to enjoy some of the most wonderful ice cream they ever tasted.

Finally, it was back to Palm Springs for cocktails at Stefans before parting ways.

It was so great to see all of our friends from near and far. A big thank you to Czar Drue and Czarina Liz Loren for their support of this adventure.