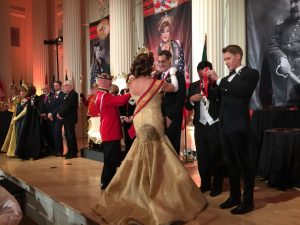 The 2015 Golden Jubilee Imperial Court Dinner held at the classic and classy Hotel Sentinel in Portland, Oregon was elegant beyond even Washington DC standards! All Ladies, Gentlemen, Courtiers and Monarchs out did themselves in fabulous ” Worth-Style” gowns and Crown Jewels that rivaled any thing I have seen in the great palaces of Europe!

Dustin Lance Black, screen writer of the movie Milk, who now lives in London agreed! Currently writing a made for TV series about LBGT history, Dustin is featuring Empress One of San Francisco Jose Sarria, as the first true pioneer of diversity and LBGT rights, which paved the way for others such as Harvey Milk, Matthew Shepard and Stuart Milk.

It was Empress One Jose, the Widow Norton we were all gathered together in our finery to honor.

The roster was packed with every living Gay Icon and advocate we have including Dennis and Judy Shepard, The Reverend Troy Perry, The Hon. Toni G. Atkins CA Speaker of the Assembly, Dustin Lance Black, Cleve Jones, Founded of the NAMES Project AIDS quilt ( both compelling speakers) Council-member of San Diego Hon. Ted Gloria, Michael Connolly the 21 year old member of the Legislative-assembly, Alberta Canada and the always eloquent and dynamic ( and dear friend and co-Global Ambassador) Stuart Milk.

The grand Ballroom of the Sentinel was as opulent as Versailles, the richly elegant pre-dinner VIP reception Hall was flowing with champagne and tasty snacks, the staff of both venues flawless in service. I have seldom seen a ICS event flow so smoothly, thanks to the efforts of the intrepid Queen Mum Heir Dragon Empress Coco LaChine and her team ( how could we forget her pageant like entrance when announced at the dinner?)

But the true star of the evening was Nicole The Great, our Queen Mother!

Looking wonderful with splendid robes and cleavage dripping with jewels, Nicole was the epitome of a true Monarch in every since of the word– and I have met a few in my world travels over the decades.

Gracious and erudite she described our long and arduous journey in history and what the ICS really stands for. Omitting no one, she honored us all in so many moving ways behind the disbursements of broaches and medals (and those that were given out this year, including the Rose Court Rose broach were of unusual high quality).

Being in the same age group as Nicole I know well the rigors of having to stand or even sit for hours on a Diaz, in front of hundreds of people, always smiling and being strong while inside wanting nothing more than a cozy bed with a fireplace ( the hotel had one in each room) and a nice hot meal! Her Majesty had to sit on a throne and keep the ball rolling while we all ate the beautifully prepared 4 course dinner. 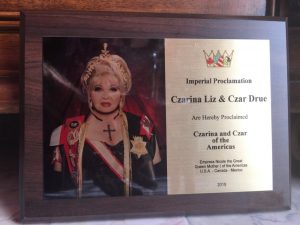 My husband Drue and I deeply appreciate and thank the Queen Mum for the additional titles as Czar and Czarina of The Golden State of California (despite the fact the plaque, with its typo said “of All the Americas”)

We were Crown Sponsors and we’re proud to donate to this memorable of all nights!

Jose would have loved the pomp, circumstance, opulence and pageantry so tastefully done!

Our special thanks to new Emerald Kingdom contributor Kyle Blitch, owner of Custom Grooves, for shooting and editing this historic moment for our Kingdom and diversity. Liz’s Wedding Blog “Drag Wedding”

The Day After The Supreme Court Decision!

June 27, 2015 was the most special days of days and ours was a historical drag wedding because of its scale, beauty, glamour and VIP attendance, but mainly because it was held the very next day the Supreme Court handed down its historic verdict of same-sex marriage across the Nation.

If one were to have walked into this wedding by mistake, at the hilltop Estate of Czarina Liz Loren and Czar Drue, they would assume they were at a “normal” Beverly Hills type wedding celebrating the union or two socialites. The groom was Handsome Prince in white tails, the bride’s maids, flower girl (and flower dog) Matron of honour were in flowing gowns of champagne chiffon accented by pearls and subtle sequins. The bride herself was a classic vision in a Kate Middleton inspired gown of 57 yards of Italian satin appliquéd with re-embroidered lace and a Vallenchine veil 20 feet long held in place with a Robert Sorrell of New York pearl and diamond tiara.

The bridal party were a vision of taste and loveliness, the wedding all girls dream of—and they were all men! Formal tables surrounding the pool were draped in white and green with tie backs on covered chairs. A large circle of ivory roses mixed with pink stock and hydrangea were the base of elegant crystal candelabra on each table, shaded by champagne coloured umbrellas. The gazebo where the ceremony took place was covered with roses and ivy garlands with even more flowers banked inside as a back ground for Reverend Roi of Palm Springs resplendent in matching clerical robes!

Stuart Milk of The Harvey Milk Foundation flew in to be Best Man for Czar Drue, and Drue’s beloved Terrier Lady was second flower “girl” to Robby De La Rivera of Beverly Hills who came with Mandy Lebbos of Love PR–and who donated the fabulous corsages for the bride’s maids and groomsmen.Beverly Hills was well represented by members of the Crown Jewels and their spouses. Present were famous decorator Bernardo Pucci and his husband Orin Kennedy, the Lerher’s and the Levinsahn’s and Dr. Lew Weintraub and his wife Gloria ( Dr. Weintraub gave Liz away), columnist Marci Weiner and author Grace Robbins, widow of American novelist Harold Robbins.

Washington DC insider and marketing director for DMK International, Yale Scott and his fiancée Dr. Bobby of “The Spa” on Rodeo were in the wedding party along with the fabulous “Spa Girls” River Harlow and the young and chic “Sky”. River brought the elegant Parisian Madam Simone Lintilhac and Prima Donna Fashionista Kaarina Kivilahti flew in from Helsinki Finland for the occasion, showering Liz with Balmain from her boutique Kaarina K!

Singing star Jimmy James took time out from his tour to gift the wedding with two of his songs and family members were represented by The Drew Coleman’s, The Steve Alkire’s and Lori Freeman, the grooms sister from Texas and her colourful friend Vicky!

But the “piece de resistance” were the flowers!

Designed and executed by LeeSalee (a close friend of Liz) the mansion overflowed with elaborate bouquets worthy of a White House State Dinner! Following Liz Loren’s signature lilies, hydrangeas and roses, tall sculpted vases overflowing towered above the Russian themed buffet tables, the inside bar and the grand piano! Even the cake table was decorated with petals and a mock bridal bouquet. Chef Jay Johnson also decorated the main courses and the Russian style starters to compliment the floral display!

Liz had not seen any of these things until she literally “walked down the aisle”, having been a bundle of nerves sequestered in her quarters with her brides maids and LeeSalee all morning! She was stunned. These are all real friends that would jump in and help with the pre wedding set up done by Con Delo, a rock star friend from Australia, and Ron Russell and Jimmy Starr of the East Coast, both media personalities there to have a good time, not set tables and move furniture, “I love them all!”, a tearful Liz later said.

Karen Cobb of Long Beach kept the guests entertained with her cabaret song selections and Ron Russell, co-star of The Jimmy Starr Show, a widely syndicated radio and TV talk show, did an extemporaneous song and dance live to a song he had written for Liz and Drue, many eyes misted over with tears to this heartfelt number backed by a Mantovani sound track–Jimmy Starr shot a special video of the event to be edited for their show later on.

The desert was a variety of small French pastries and the cake! The cake, designed by Pin UP cakes of Whittier was a French Confection triumph of white butter creme frosting sculpted with Ivory marzipan roses and soft pink freesia over three tiers of separate flavours. Served with Vueve Cliquot champagne that flowed like water the entire time! It was said that the younger attendees went through nine bottles of Russian vodka, yet no one seemed plastered!

The ceremony was classic but tailored to a same-sex marriage and one could see the emotion between the couple as they said “I do”. There was an almost otherworldly feeling about the wedding and the reception after, as the Western sun descended into the Pacific throwing that special, golden light over everyone.

I appeared as Liz as a statement to all my LGBT friends and supporters around the world and for the people who have supported Emerald Kingdom. There were some critics that shouted “why marriage in drag?”; my reply was “why not?”

The very basis of our Foundation and fund raising is that every human being on the planet has the right to be and appear as they are or how they perceive themselves to be–I am many things and Liz Loren is one of them! My husband, bless him, supports all of me and all the many cloaks I wear because he knows my true heart, and I know his. 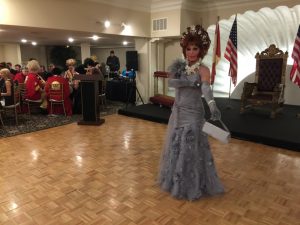 Historic video of the Imperial Court de San Diego Coronation with the investiture of Princess and Prince of All the Americas as successors to Queen Mother Nicole the Great of the International Imperial Court System, including 13 year old transgender child Zoey is honoured with a cheque from the “Nicole Murray Ramirez Scholarship Fund”.

The Czarina takes the cat walk at New York’s Night of a Thousand Gowns by storm! After being honored as a Jose’ Honor Award recipient and surprising everyone with a live performance at The Industry Club Out of Town Show! Read “Czarina Liz Loren to receive Jose Honors Award“.

“I felt like a genuine old Broadway diva”, states Liz, “and was so thrilled when Empress Witty Repartee’ announced she read my book. I am so grateful for all the love and support from my dear and wonderful New York friends!”