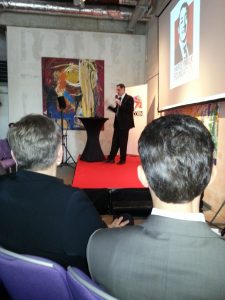 Stuarts compelling speech the first day brought tears to many eyes and he pointed out Liz and Danne’s company DMK International as being the new business template of how donations and business can go hand in hand by bringing the message of diversity and equality to people even in hard core places like Russia.

DMK long known in Russia as one of the best skin revision concepts in the world is bravely selling the new, highly expensive but true miracle age management creme TransGenesis that Dr. King formulated just for raising support for the Harvey Milk Foundation.

We say brave because plainly written inside the lid on the box is the story of this endeavour enforcing the message for LGBT people everywhere.

Who knows what top official or his wife will see this message?

At the conclusion of the conference Stuart and Dr. King were given a tour of the German Bundstadt (Parliament) by MP Mechkilde Rawert, herself a huge activist for minority group rights. She invited Stuart to speak at a memorial for a intersex person who had passed on.

The service was held at a Catholic Cathedral in Berlin and was attended by a group of the saddest but most hopeful people we have ever met. It broke our hearts to talk with these persons who were born with both sex organs yet had no choice over the surgery that made them become, as one person told me, “a funny lady”.

This is not transgender–this is people with no choices and now we feel compelled to help them as well!

The German kids who came to the conference were all called UNICORNS because this is a mythical creature who was hunted down and destroyed just because it was different.